The Laws of Because

KARMA, CHAOS, WILL and GRACE…
THE FUNCTIONALITY OF CONSCIOUSNESS

We ask Why? How? Why was Abraham Lincoln assassinated?  How did it come about that humans landed on the Moon?  Why did Mom marry Dad? How did I win second place in my high school Science Fair?

Once we assume (or pretend, if you like) that consciousness is fundamental, like space, like time, we can then engage in speculation as to how consciousness can interact with and within space and time. Thinking of this is an act of imagination. We talk about space and we say length and area and volume and density. And adding time, we get velocity, acceleration, momentum, force. How can we formulate the idea of conscious interactions into rules of action?

It seems to me that there exists four general ways in which change occurs. These all happen at once in varying proportions: 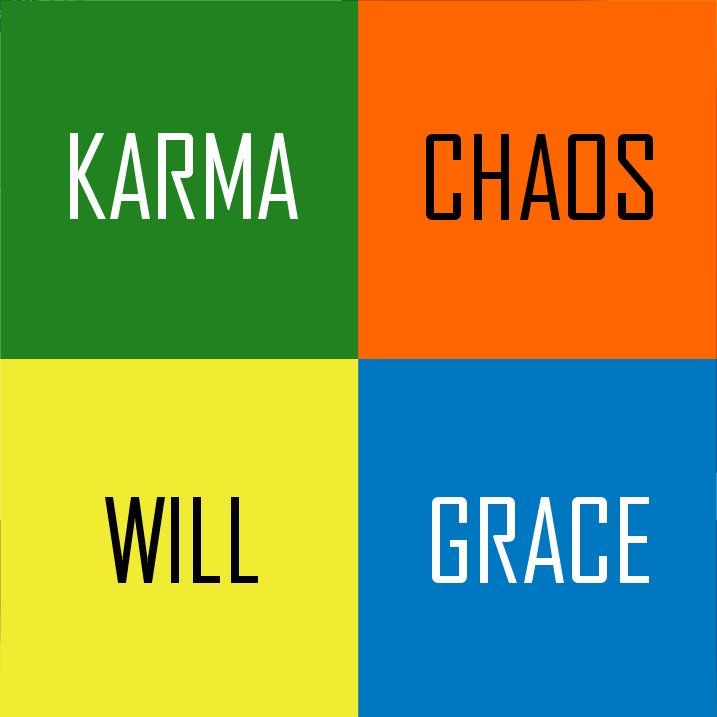 For explanation purposes, let’s start on the personal level, with the individual. We can call the forward thrust of a person’s ego the Will. Will is the result of desires. Will stands alone. It comes from the egocentric view that “I am separate: I see, I like, I plan, I obtain.” This is pushing against the spacetimeconsciousness fabric by a reductive consciousness (ego) to accomplish some end. Planning, organization, decision making, exertion, profit-loss analysis. Will is capitalism. Will achieves despite the odds. Will is proud of itself. Will pushes bravely toward the perceived future.

Also on the individual level, there is also a countermanding urge, the longing for connection, for completion, for merger with and integration into a larger consciousness. This is Grace. Grace is the going-with-the-flow characteristic of consciousness. At its most effective, this may be imagined as the purposeful tuning to the sublime magnetic field of Consciousness. (I use the term “magnetic field” figuratively, because consciousness does not react to electromagnetism per se. Consciousness is outside of space and time, though all three integrate to form the whole.)

Grace in life comes from being centered. The graceful dancer is always innately poised around the center of gravity of the body in motion. Likewise for a conscious spacetime entity, grace comes from being centered within oneself, in the moment, the Here-and-Now. Centering allows the tuning, the human body a radio that has to learn to receive coherent signals and transform them into sound waves, or in this case, a consciousness wave, a sense different from those gross senses of the physical body. Grace is a human attribute, not some supernatural appendage.

Grace is realized during the state of meditation, wherein the “mind” becomes still. Meditation is the resting mind. Taking in, not pushing out. The experience of grace, not an act of will. And quietude is good for the mind. A release of tension. Grace is the act of gratitude. Grace is not a god-given attribute; rather, it is a normal human capacity. It is a function of consciousness. It comes from living in accordance with the universe, from tuning in to the universe, from going with the flow of life, from learning to see with compassion.

If you are human, you can charge ahead (Will); or live your life by observing and attempting, however poorly, to align with the larger consciousness (Grace). The Yang approach is ultimately in balance with the Yin.

Karma is the principle of cause and effect, almost Newtonian in its simplicity. Today is a reaction to yesterday, a deflection, a diffraction. What happens in the present moment is a consequence of past actions. What goes around comes back around, though given the endless possible permutations of energy, some of what went around was transformed into other types of energy on the way back.

When you strike a match, the force you apply meets with friction, which creates heat, and begins a series of chemical reactions creating a flame, and as a final result you are left with ash. In a similar fashion, every willful act initiates a series of reactions, equal in total magnitude (conservation of energy), but manifesting in many possible ways. The reaction may be immediate or it may take time (lifetimes, if you follow the reincarnation axiom); and it may come suddenly all at once or it may happen in increments. But ultimately every action has consequences as naturally as a tennis ball bouncing off a wall or being caught in a net.

Every willful act, whether from love or rage, is subject to Karma, and much of the impact is merely simple reflex or eventual “blowback” in kind.

In actuality, most results of karmic influence are routine, mundane and inconsequential. Just pay attention. You run a red light to get somewhere faster and then you are delayed further along. No real harm, no foul, just karma.

Karma can more constructively be seen not so much as “getting back at you for what you’ve done”, as it is a method for projecting forward what you want the future to revisit upon you. Think of it as a Karma Machine if you will, and if you so choose, then progressing forward with a vision of a better world might seem a good plan. Karma makes no distinction such as good or evil, it just returns tit for tat. If one continues in in life on a path to attempt to facilitate healing, karma is pushed upon.

It’s solely a trick of imagination, but no less effective for its being imagined. Your entire universe is imagined. In a real but limited sense, it’s all in your head. But it is absolutely real and complete as is. The more forward you thrust your focused noninvasive attention, your centered awareness, your imagined influence, the better the future will become. This is faith. Imagine you’re creating a more perfect world and that you live every moment “tuned in” to some underlying stream through the fabric of consciousness.

There is one final mechanism at work, this too, on the larger scale. It is not so much an act of consciousness as it is a consequence of the law of large numbers. With so many things happening at once in the universe, emanating from different sources and with different trajectories, the law called “extreme sensitivity to initial conditions” makes predicting outcomes uncertain. This principle works even in the mundane deterministic Newtonian realm. It is why weather prediction is so limited. This is the Joker in the deck.

Regardless of willful planning or conscientious attention to the here-and-now, you just may find yourself in the wrong place at the wrong time and become a statistic in some horror count.

Chaos is, of course, mitigated by karmic repercussions to a degree, and often smoothed over by grace.

It’s an unpredictable world, a swirling mess of influences: Will, Karma, Grace, and whoops, Chaos. That’s life. Everything that happens in the realm of consciousness is a consequence of combinations of these four mechanisms. Karma, Chaos, Will, and Grace.

Will and Grace are to some degree a personal choice. Karma is Newtonian in its inevitability. Chaos is unpredictable, the result of multiple wills, karmic reactions, and merging consciousnesses converging and interacting within the continuum. Life is purposeful in degree and reflexive in degree and graced in degree and random in great degree. The ultimate mechanism of the universe however is “something other than absolutely random”. (Joe Malec)

Be grateful. (Ah, gratitude, the conscious realization by the ego of how the confluence of will, karma, and grace with the wild card of sheer chance has resulted in relative fortune. Gratitude is self-healing.)

Or alternately, choose to look at it as all dark and getting darker. Push in that direction if you wish. That’s just not where I’m going. It’s all a projection from imagination. It’s all belief. Yet it effects everything surrounding you.

Are you paranoid? Your universe will warrant your paranoia. There are as many future multiverses as there are sentient beings in the universe. Your mind has created an entire universe by your imagination. It may be sophisticated and quantum astrophysical or it may be heaven, earth, hell, purgatory. But it’s an idea projected into the spatiotemporaconscious web and it moves the reality of your future incrementally into that direction.

Your universe bends to your imagination. Use your mind to do some good. 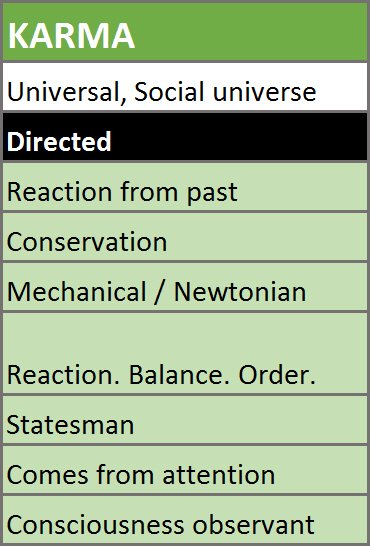 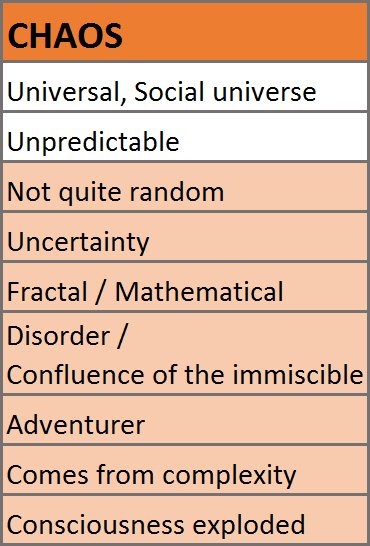 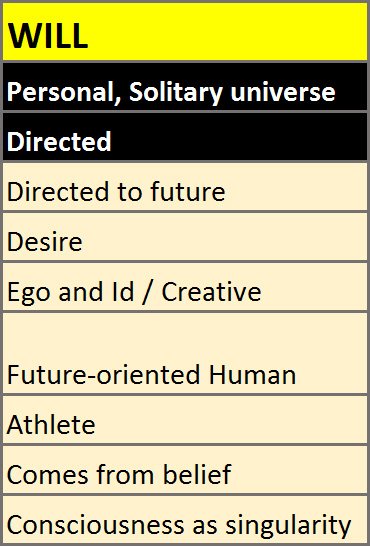 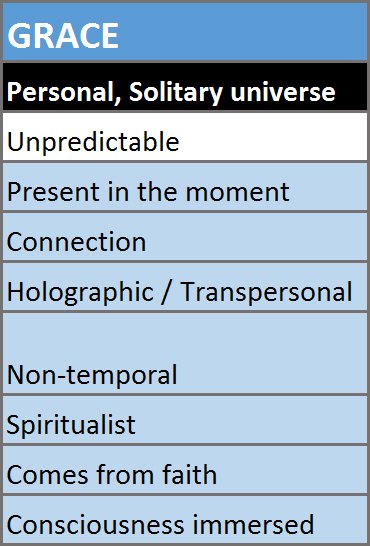